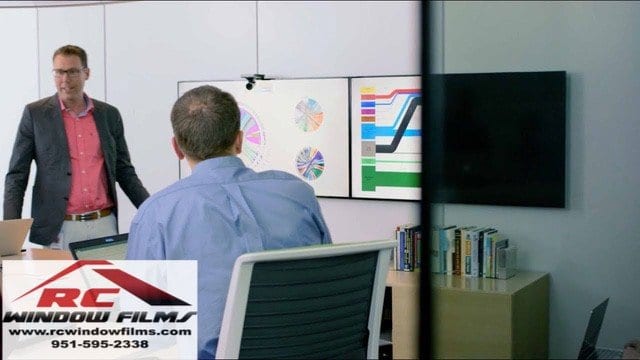 Casper Cloaking Film: The Perfect Choice for Your Company’s Privacy in San Diego and Temecula Ca

When it comes to the operations of a business, regular meetings are the key to success. Everyone at the company needs to be on the same page in order for them to be able to work together and create solutions that help their company move forward. Meetings with just papers and people can end up being quite boring for those involved in it. To make things engaging and organized, the use of a screen is a good way to handle operations. However, it also runs the risk of revealing key information to anyone who walks past the door if the meeting room is made out of transparent glass.

The obvious choice of action would be to use blinds or some other method of blocking light from leaving the room. However, just like how light would be blocked from going out, it would also be blocked from coming back in. Sound trivial? It actually isn’t. Light actually has a larger effect on a person’s mood and their performance than they would expect. Instead of blocking out light, you need to ensure that it comes into your meeting room to ensure productivity. But how do you keep your screens private? The answer is Casper Cloaking Film.

What is Casper Cloaking Film?

Casper Cloaking Film is a revolutionary architectural film that helps offices keep their privacy in check without having to leave their employees in the dark at all times. This new cloaking technology was developed by Matt Mead, an office employee who was trying to come up with solutions to something else rather than creating a LCD privacy film.

What Matt was searching for involved finding the right film or cloak that would ensure video conferences could go on without a cinch without ending up being subject to technical faults due to light. Although natural light is quite beneficial for people inside such conference rooms, it actually interferes with the cameras deployed and creates problems in the communication that is supposed to take place there.

What Matt ended up creating was something that did something quite different. Rather than letting light in, Casper Cloaking Film stopped light from going out. And not just all kinds of light, it became an exclusive LED and LCD privacy film.

The idea for Casper came to Matt’s head one morning while taking a bike ride. He explains the process of creating Casper Cloaking Film to a child’s juvenile experiments. Rather than having a set direction of where to go with Casper, Matt began creating ideas and throwing everything he had into them in order to make them work. Slowly, what came into being was a technology that did not stop interfering light from coming into the room, but some light that would normally go out of the room.

Casper Cloaking Film works just like any other pre-emptive measure: it blocks. However, the light it blocks is not natural lights. As Matt developed the technology, he came to realize that was actively working on the light emitted by LED and LCD screens. A typical LED display filters out light and only reflects the vertical light waves. Screen displays work as light filters and the Casper Cloaking Film works in a similar manner. Rather than filtering and letting out vertical waves as screens do, it simply blocks them. Hence, the cloaking technology that Matt was working on turned out to become an LED and LCD privacy film rather than something that would help block out natural light and prevent video conference rooms from experiencing technical issues revolving around natural light. With Casper Cloaking Film installed around a glass office, someone looking from the outside would see everything inside as they would normally, however, the display screen will just look black and blank.

Matt became aware of just what his cloaking technology could do early on in the development phase. While it did work, it needed to be conditioned for optimization and desperately needed to look more appealing than it did in development. For this, Matt turned to Andy Graham, the acting chief innovator at Designtex.

Graham brought his experience and his ideas to Casper and gave it a design that would make it look appealing and would offer a look that offices would want. Together Matt and Graham began ironing out the Casper Cloaking Film, trying out a range of different styles and looks and optimizing the technology to become something that would perform consistently at all times.

The results proved to be exciting. Not only did the Casper Cloaking Film they developed have the aesthetic qualities that would impress people, but the cloak’s performance left no boxes unchecked. The Casper Cloaking Film turned out to be a cloaking product that offered LED and LCD privacy effectively. The technology turned heads as soon as people came to know about it and began attracting attention all over the country, with lengthy features in major magazines such as Wired.

Casper Cloaking Film offers perfect privacy for your office. Every company and office needs to hold conferences and meetings, whether they be via video or in person. Going back to analog meetings is not the solution. Making the most out of technology is what drives businesses today forward. With Casper, you have the LCD privacy film that will allow you to deploy display screens all around your office without having to worry about your secrets leaking out to any prying eye.

Casper Cloaking Film allows you to let your meeting rooms bask in the light and helps you carry out meetings without a bit of worry. Furthermore, it does not look unappealing either. It’s an aesthetically sound product that will nuzzle its way into your office and enhance the look of the place rather than disturbing it. With Casper Cloaking Film, you get to openly organize your office just like you want while being rest assured that what goes on in the office stays there with an effective LCD privacy film.